'Full fathom Five' is a new, larger painting I am working on. It consists of nine aluminum panels that 'float' in a grid within a white frame. 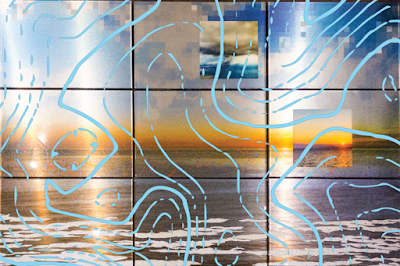 
In the background there is a seascape of a calm sea at dawn or dusk. Over the main image, various other representations of the scene are superimposed. There are images of the same location at different times. Parts of the image expose the visual illusion as larger pixels appear. In other areas the illusion of the image is conveyed through painted passages. On the horizon, weather maps act as another depiction of this place. Over top of the image are contour lines of what lies beneath the surface of the water.

Full fathom five thy father lies;
Of his bones are coral made;
Those are pearls that were his eyes:
Nothing of him that doth fade
But doth suffer a sea-change
Into something rich and strange.

In this poem. a fundamental transformation has occurred in the body. Every part has changed into something else. The constituent parts are all different; they've been swapped out and yet the body has not faded.

In a sense, this art piece is like this changed body.  A re-presentation of the world. What you see is not the thing in itself, but a set of ideas and incomplete representations of a time and place that once existed.

It is the water that has caused this sea-change and its the water rather than a body that is the subject of this painting.  Water is a substance that one can never fully perceive with the eyes or the mind. Stare at the rippled surface. Try to follow one little wave and you are quickly lost among the rest.  To 'fully see' the waves is an exercise in futility and a demonstration of how limited our perception of reality really is.

Posted by Mikael Sandblom at 2:46 PM