In my new painting 'Ground Zero', themes and visual elements that I've used before are organized as a kind of extrapolation from a photo of a particular place. 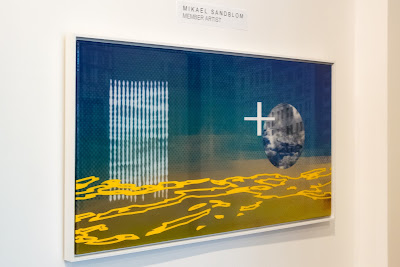 The background of the image is a photograph from just south of the 9/11 memorial. It looks east towards a church under construction.  From this location, the memorial is to the left. The motif of the vertical water pattern here refers to the waves that move through the streams of water as they fall into the monument. They also recall the ribs of the Calatrava train station just north of this place. 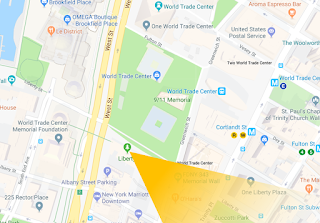 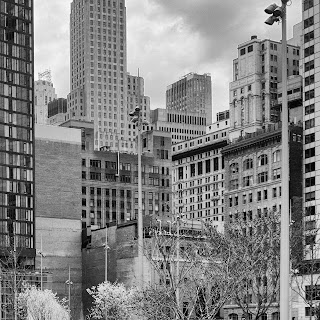 The source photo for the painting

The water pattern at the bottom can refer to the water underground, held back by massive concrete walls that remain from the old World Trade Center complex. It could also refer to the island location and the precarious situation in the face of rising sea levels.  As in previous paintings, the water image also reflects impermanence and constant change - particularly apt for this location.

The plus-sign or cross can refer to the Easter Orthodox church that is being built here but I also see it as the grid of the city which runs into the more chaotic older street pattern at this location.  The right angle is the angle of the city street, of the buildings that is imposed over nature but which in the long run will be washed away.

The circular photo acts like a lens through which the background image can more clearly be seen. It's a small lens, it only sees through to a small part of the background.  It also refers back to the pale blue dot that is the world.

None of these elements or interpretations are required to 'decode' the painting. Visually it stands on its own and viewers will have their own interpretations.  It's loose enough to foster and accommodate a sense of mystery.

For me, as the artist, the use of specific meanings tied to a real place is an ordering system that prevents the painting and the constituent elements from becoming arbitrary. 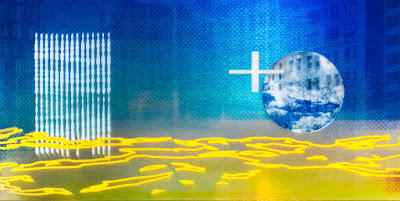 Posted by Mikael Sandblom at 1:23 PM No comments: